For some time now, I have been blogging about food and wine, and whilst I have worked for ten years in the wine trade, my cookery skills are purely homespun.   So for six weeks during January and February, I commuted backwards and forwards from Dorset to Ashburton Cookery School in Devon with the aim of learning how to cook properly.  And what an eyeopener that was.

Week One, Day One: Embarking on the six-week professional culinary certificate with thirteen other students back in mid-January, I was staggered by the amount of dishes the programme suggested we would get through and it’s fair to say that each day was full-on.  Before we were let loose in the kitchen however, we took a course of sessions on food safety, culminating in a level 3 Food Safety for Supervisors examination.

Week One, Day Five: The tutor chefs at Ashburton have all worked in top positions in acclaimed restaurants all over the UK.  I came to love their professional yet relaxed teaching styles, their humour and their incredible patience.  Day One in the kitchen was something of a shock to the system – fast-paced with organisational skills heavily emphasised, but the tone was set and we knew what to expect as the course progressed.  I went home at the end of that day and spent half the weekend chopping carrots, chives and fingers in a desperate attempt to improve my knife skills.

Week Two, Day One: Suddenly things really kicked off with meat butchery swiftly followed during the week by fish filleting (both flat fish and round fish).  Each day in the kitchen included demos by the chefs and the opportunity to go away and try the dishes for ourselves at very well-equipped kitchen stations with two tutor chefs giving advice and constructive criticism as we worked. Ingredients are sourced locally wherever possible and so we used some of the best produce Devon has to offer.  In the back of our minds for much of the time were the three four-hour, practical examinations due in Week 6 during which we would be assessed against the level 2 professional culinary certificate standards.  But there was loads of encouragement and a whole host of tips from the chefs for getting through this process successfully.

Week Three, Day Five:  On Fridays, a couple of hours were devoted to theory.  Sessions included lamb, beef, pork and vegetable cuts, pastry, game cookery and would conclude with an overall review of the techniques covered during the week.  This was a useful exercise for me. It rounded off the week helping me to firm up on what I’d learned, and some very useful handouts were provided, particularly on meat butchery, fish filleting and preparing sauces.

Week Four, Day One: As someone who loves the food of Provence and Liguria, I was very keen to try the recipes from those areas – pasta, focaccia, risotto and pesto were all on the agenda, and the pesto exercise found me suffering a severe case of pestle and mortar envy.  That’s my next birthday present sorted then.  Husband: take note. The overall course programme was very broad however, with a balanced mix of classic and regional dishes, baked goods and desserts.

My fellow participants included chefs working on yachts, a lawyer, another HR professional like me, and students looking to start their own food-related businesses or enter the restaurant trade.   The challenge for the tutors, given that some of us had no experience in a professional kitchen and others had plenty, must have been huge.   But it worked and by the end of the course the group was really gelling and some firm friendships were formed for the future.

Week Six, Day Four: After the three practical examinations which were held over three days, we each had a tutorial with the assessing chefs where we were given our exam results (I passed, you’ll be relieved to hear), with feedback and constructive comments on our overall performance during the course.   We were also asked if we would like advice on our chosen next steps in the food industry and I found the positive encouragement from this session invaluable. 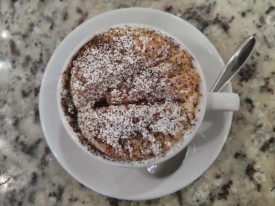 Week Six, Day Five:  Our last day was hilarious.  We took part in a team canapé challenge and cooked some delicious Indian dishes.  There was plenty of laughter and everyone was clearly relaxed after the ‘trauma’ of the assessments earlier in the week.  Proceedings were rounded off with an awards ceremony where we received our certificates and the all-important Ashburton Cookery School medal.  I shall wear it with pride!

It’s been very strange not making that trip down to Devon this week.  The six weeks flew by but I had got quite into the routine of it and enjoyed the daily chats and swapping of notes with some of the lovely people I met on the course.   I look forward to hearing where they go with their new skills in all corners of the globe.  Finally, a very big thank you must go to everyone at Ashburton Cookery School for making my six-week stay there so enjoyable and rewarding.  And if you are thinking about taking a cookery course, be it professionally or for leisure purposes, I recommend you check out Ashburton’s ‘Ten Reasons to Choose Us’ on their website.